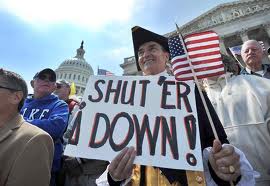 Of late there has been a large number of people in my family and at work coming to me and asking if these government shutdowns are the beginning of the economic meltdown I warn them about. In short, the answer is absolutely not. There are nations in the world which are able to borrow money if they need to (the US is in this category) and then there are nations that nobody will loan money to because they're already too far in debt (Greece, Ireland, et al). In the US, Congress actually has to authorize our government to borrow money. We have nearly reached the limit of the last borrowing authorization they passed. The Republicans are now threatening to stop the next borrowing authorization (it's called "raising the debt limit" by the media), which means that the US Government would immediately be forced to live within it's means. In late July or early August, the US Government will reach the previous debt limit and will no longer be able to borrow money.

The Federal Government is borrowing $42 out of every $100 it spends.. this simply cannot continue, and both the Democrats and Republicans know this. Worse, out of that $42 our government has to borrow, about $35 of it isn't even loaned to us-- the Federal Reserve (Ben Bernanke) simply prints up some money and "loans" it to the government. The effect of this is the weakening of the US Dollar-- notice the price of things going up ? The US Government needs to raise taxes and/or cut spending in order to stop this speeding trainwreck. If Congress fails to reauthorize the ability to borrow (raise the debt limit) the effects would be profound. The military would immediately be recalled from every nation on earth and entire divisions released. Navy ships recently built would rust in dry docks. Medicare and Medicaid would stop covering nearly all expensive surgical procedures and hospital stays over 3 days.. these people would simply be referred to hospice. Social Security would be "means tested", meaning that anybody getting Social Security who already makes $36,000 or more would be cut off. Several federal departments would simply cease to exist-- the Dept of Energy, Dept of Education and other non-necessary ones. They would cap Soc Sec to $1,200/mo. The effect on the economy at large would be profound as well; there would be a very serious chance of deflation and Depression. Deflation will strangle small businesses' ability to get loans and keep themselves solvent. Unemployment would likely double within six months; and unemployment insurance would likely not be extended. But-- we would begin to finally address the debt problem. But this will never happen.

Don't worry people-- just before this debt limit is reached in August, there will be a deal. There will be small spending cuts for the Republicans (most of which are likely to take place in 2016 or later) and a few small fee hikes for the Democrats (again most of which are likely after 2016). In short, the US Government will simply continue to do what it's been doing all along-- print, borrow and spend-- but at least the politicians look like they're actually doing something about it. Yes folks-- this is "kicking the can down the road" at it's best. The politicians will give themselves high fives and speak of "painful decisions"-- but it will be nothing of the sort. Painful is what I described above. None of our political leaders want to be responsible for another Depression and so will never really deal with the reality of our debt-- they'll just continue to borrow.

The problem is that, one day soon enough, the US is going to become Greece unless we figure out a way to stop borrowing. But it's my guess that before we reach our Day of Reckoning, others will get there first-- Spain and Italy come to mind. Given the size and complexity of Spanish and Italian debt, I have serious doubts the world's financial system will survive these nations' implosions. On this blog I tend to concentrate on those nations who cannot borrow any more money like Greece because to me it's far more serious to the world's financial system as a whole than a group of politicians in the US who will solve the political problem on the back nine of a golf course in late July.

Here in Minnesota, our own state government shut down yesterday-- and the story is pretty much the same as outlined above.. our Governor, a Democrat, wants to increase spending by $3 billion/yr and wants to tax the rich to pay for it. The Republicans want to increase spending by only $1 billion/yr and keep taxes the same. Nothing serious is getting shut down, however-- welfare checks and food stamps will continue as before, there will be plenty of state troopers this holiday weekend cruising around, medical facilities will continue as before. You can even renew your drivers licence. Courts will continue. The only thing shutting down is highway rest stops, parks and rec, the Minnesota Zoo, a few horse racing tracks and most of the Dept of Transportation, although emergerncy road repairs are still available. Whats absolutely amazing is that despite most essential services remaining intact, 22,000 of our state's 34,000 employees will be laid off. My question is-- what good are these 22,000 people doing anyways ? My idea here is that we have an amazing number of office workers pushing paper around to each other. Anyways, there will be another round of golf, a deal made on the 15th hole, and both sides claiming victory; look for it to happen within 2-3 weeks. In a few months, nobody will remember this charade, and rightly so. It's a joke-- and it's you that's paying for it.

Speaking of Greece, the Greek parliament passed the necessary austerity measures. The Greek Unions (mobs, really) celebrated by taking over the Acropolis and setting the Ministry of Finance on fire. In a few weeks, the Troika (the ECB, EU and IMF) will come to a consensus on how to best to pile more debt onto an already insolvent country. Ultimately, those who cannot pay off their debts will not pay their debts. But they have indeed bought time here; this will likely not be a problem until next year sometime when Greece will need their third bailout in as many years. Next up on the dock will be Portugal, which at this time actually has no government and is also insolvent.

There have been some tremors of late in the credit and bond markets; it seems that credit is getting harder to come by. The US government was to have an auction to sell off some Fannie Mae "assets", but halted the sale. The US Ten Year Bond's interest rate rocketed upwards in the last few days, proving Bill Gross right. I'm not all too sure what's happening here (I'm thinking the end of QE2 has a lot to do with this) but if it gets out of hand it we might see serious deflation. Here's a link to Bruce's article on this matter for those who might be interested: http://brucekrasting.blogspot.com/2011/07/are-credit-markets-getting-unstable.html
Posted by Mr. Kowalski at 7:28 AM