Predictions for 2012-- The Flames of War 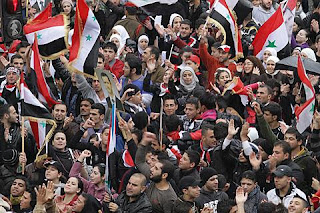 1. There Will Be No Recovery in the US: Just like last year, we as a nation will {again} borrow $1.6 trillion  between the Federal and State Governments, about half of it via Bernanke's printing press. The US Government will {again} borrow about 40% of all the money it spends. This can't last forever-- but it can last much longer than you might think. This year, Japan's central government (4th year in a row) will borrow above 50% of it's total spending.

2. Greece will default-- hard: Greece's government will finally give up on being bailed out and hire a firm to represent it in a bankruptcy type scenario. This will cause a few ugly things for the Greeks-- their banking system will collapse to begin with, and the problems will reverberate throughout the EU banking system. Greece will immediately have to balance it's budget and will go back to the Drachma. Since the civilian government is unable to make the hard decisions, a military government will take over.

3. European Banking  System Will Be Rescued: Last week, the ECB engaged in what was called an LTRO-- it was, in short, a sly way of providing cash to it's very cash strapped banks. This operation was just under $500 billion. These people are amateurs. Bernanke did this for US banks to tune of over $7 trillion. Between Draghi and Bernanke, they'll make sure the system itself will survive Greece's default and any other major problems by additional LTROs. There will be rumors of some very large European banks close to collapsing, most of which will be true. France's Agricole was near collapse a month ago.

4. Deflation: Thanks to the Basil III agreement, European banks need to raise a substantial amount of Tier 1 cash-- some estimates are $400 billion, to meet the Basil III capital requirements. They have already started to curb loans and sell assets in an effort to meet Basil standards. Also, European nations will need to borrow and roll over a huge amount of money. This, in combination with losses from a slowing economy and Greece, will create a serious cash crunch. Perversely the Euro, which is on it's last legs, will rise in value vs the USD. It'll hit $1.50 this year at some point. Gasoline in the US will go below $2.50/gal. In the US, deflation will come about for many of the same reasons.. bank losses due to a slowing economy & losses in Europe. This will bring about..

5. QE3-- Bernanke Unleashed : With a friendlier group of Fed governors, The Bernank will not hesitate to unleash the printing presses in the form of both MBS and Bonds. I look for it in the first half of this year. There will be criticism from Republicans, but Obama will give him the cover he needs as the money velocity measurement plummets.

6. Bernanke's EU Rescue: I look for one of the big two EU problem kids.. Spain or Italy.. to get into some very real trouble this year. As of this writing, Italy looks like the weaker of the two, but Spain has some very real issues and an ongoing Depression to begin with. I think the ECB and the EFSF will have to be given a quick assist from The Bernank as the situation looks as though it will get out of hand. Bernanke will purchase the bonds of an EU sovereign this year directly or through a 3rd party such as the EFSF. Republicans will use this to crucify both Obama and Bernanke.

7. EU Treaty Changes: At the last meeting between Merkel and Sarkozy, there were some drastic changes proposed to the EU's constitution, the most radical of which is a balanced budget amendment which must be added to each members' constitution. Most of this will not get done this year. But something else is afoot-- last week, it came out that only nine of the 17 members of the Euro currency nations need pass this for it to become law. By this year's end, at least three of these current members will reject the changes. It will leave them in an akward position to be in a currency union, yet having rejected the changes. It is, at it's heart, a backdoor way to invite nations to leave the Euro currency. At least one nation {other than Greece} will take the hint.

8. Bashar Assad Overthrown, War in Lebanon : There is much more going on here than meets the eye. What is not being reported here in the West is the extent that the Saudi Crown is involved in supporting the Sunni Syrian rebels against the Alawite Assad regime. They're also involved in supporting Sunni insurgents in Iraq, which has slowly become an ally of Iran right under Obama's nose. As Syria's economy begins to implode and rebel attacks increase in intensity, Syria's junior Sunni officers will overthrow the Alawite regime by seizing control of company and battalion level units. As Assad begins to falter, Iran's Hezbollah friends in Lebanon will launch attacks in Israel, hoping to ignite a regional war to save the Assad regime. Israel will not take the bait, and will only retaliate sporadically. Iraq will again run the risk of civil war as the Saudi supported Sunni rebels continue with their terror campaign to destabilize and weaken Al-Maliki. Unfortunately for Israel, Syria's new regime will be no friendlier.

9. Israel, US, Saudi Attack Iran: It will be a combined air, naval and missile attack. Unfortunately, it will be too late as most of Iran's nuclear facilities are hidden too far underground. Iran's air force and navy are destroyed, as well as a number of nuclear related sites. Crude goes up slowly, hitting $150 before the US declares victory. The Saudis will quietly give financial, military and other support-- even to Israeli planes. They'll also pump more oil to ease the pain. Obama will go along with this as he realizes that America hates a wimp and he needs the Jewish vote if he wants any chance to win. Look for this nearer the election.

10. Mitt Romney wins US Elections: Between the stalled economy and Bernanke's bailout of Spain instead of California, the Republicans will emerge with the Presidency and the Senate by the slimmest of margins.

PS: Japan's Fukushima reactor is still a very dangerous situation, and will be very expensive to fix. It could still go very wrong, but I think it will be OK.
Posted by Mr. Kowalski at 2:06 PM