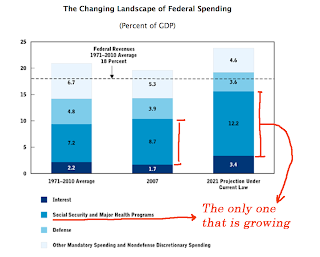 On July 19th, the Congressional Budget Office {CBO}, which is a non political budget organization, came out with a quite important report, which was largely ignored what with the Euro crisis and budget ceiling talks. In this report, which was unusually blunt, it came out and said what we all know is the truth-- which is that America cannot continue to borrow at the current rate it is doing and that in the long run we must do one (or a combination) of three things:

My first comment is that while it is true that at some point these choices will need to be made, we are still able to borrow obscene amounts of money-- and its my view that until the day arrives when we are forced to make these painful decisions, we'll just keep borrowing and avoiding.

But at some point, we will arrive at the Day of Reckoning. What happens at that point really depends on how the government looks-- if we have a strongly Democratic government, higher taxes and defense cuts will happen. If we have a strongly Republican government, the elderly programs will suffer. Social Security, MediCare and Medicaid expenses are set to explode.. this is by far the biggest part of the problem, along with the ever growing payments on our national debt.

But I want my readers to consider this: what we are seeing is one of the greatest inter-generational wealth transfers in all of history. Lets start with the current generation's borrowing-- and handing the bill to their children's generation. Combine this with the exploding cost of Social Security and Medicare-- a cost to be paid by our children. From where I sit, the current generation stands condemned of the worst of all crimes-- greed to the point of impoverishing your children, which will be a mathematic certainty given the promises made via Social Security, Medicare and the monstrous debt. Shamefully, I'm part of this Generation of Greed. If I were Emperor, I'd cap Social Security, Medicare and Medicaid combined at it's current level of 9% of GDP and I'd limit Defense spending to 2.5% of GDP from it's current 4% {I'm not a fan of foreign wars.. we can easily reach the 2.5% by withdrawing our forces based in other nations}. I'd also return tax rates to Clinton-era levels. If this means that the amount I get when I hit retirement age is slimmer and the government refuses to pay for a ridiculously expensive surgery to save my old arse, so be it, and would plead with my fellow grey tigers to join me in accepting a slimmer future so that our children might have a brighter one. I doubt any will. Shame. Here's another article on just how much Soc Sec was promised: http://www.zerohedge.com/contributed/inflation-%E2%80%9Cbend%E2%80%9D-points
Posted by Mr. Kowalski at 7:03 PM