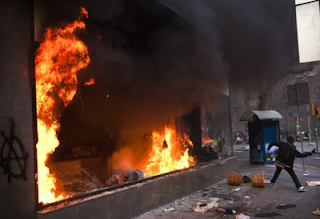 Up until this week, the European Central Bank's LTRO operations have kept the lid on the problems facing Spain and Italy. Since December, the yield on these nations' ten year bonds dropped a couple of points and were holding steady the last couple of months. Champagne corks were heard popping everywhere as politicians and bankers stupidly celebrated their victory over the basic tenants of mathematics and cascading debt. Unfortunately for the landed gentry, the basics of mathematics have staged an ugly comeback.


The first torpedo from Madrid came on 3/27, when the Bank of Spain reported that the Spanish economy would contract by 1.7% this year. Spain's Prime Minister Rajoy, the next day, announced  €27 billion in budget cuts to Spain's federal budget to meet EU budget targets, as well as some tax hikes on electricity and corporations. The reaction in Spain was immediate and ugly-- roughly half a million workers went on strike, and in a number of places the protests turned into riots. The next day, nearly 900,000 people marched in Madrid to protest the budget measures, again with some of these turning violent.

On Tuesday, Spain's budget minister announced that Spain's national debt will spiral much higher than anticipated. Fresh data from Spanish authorities also showed that unemployment again rising to a brutal level of nearly 23% and that tax revenues collected were less than anticipated due to "contractionary conditions". An March forecast from Spain's Labor Ministry suggested that unemployment would rise to 24.3 %. I myself see an even 25% number. The percent of people under 25 who are unemployed is above 65%-- yes, two thirds of Spain's young people are sitting at home. That or throwing molotov coctails.

Yesterday the Spanish government went to the bond markets to borrow money, and the results were ugly-- the interest rate demanded by creditors was much higher than forecast. As a result of this ugly bond auction,. yields on Spain's Ten Year Bonds, which were under 5% at the beginning of March, have soared to 5.81% as of this writing. This is the market's way of sending a shot across the bow. Short sellers will dogpile onto Spain's misery and unless something is done, we'll see above 6% next week.

Today, Spain's PM Rajoy uttered the nastiest of all words in Europe-- the word "bailout". He said that the new budget measures were better than a bailout, but the markets were again spooked that he even uttered the word. There will be no bailout for Spain-- it's too big to bail out, and everyone knows it. The current EFSF would only be able to manage to fund about half of Spain's bailout needs. The market reaction was also ugly-- in addition to the aforementioned bond debacle, stock markets near and wide are sinking and as people and institutions begin losing faith in the Euro currency itself, they are piling into the Swiss Franc at such a rapid rate that this morning the Swiss National Bank (again) had to intervene to keep it's currency from appreciating too rapidly. Others are selling the Euro because they (rightly) expect another LTRO.

The battle is far from over between Europe's bankers versus the basics of mathematics. It might take a while, but always bet on basic math, folks.
Posted by Mr. Kowalski at 9:30 AM 13 comments: Links to this post