When Population and Agriculture Collide 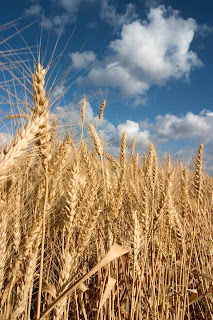 In the late 1700's, a British mathematician named Thomas Malthus did some calculations and determined that the human population growth was on an unsustainable path and would one day collide with the limits of agriculture. Since then, this scenario has been called the "Malthusian Catastrophe". In 1968, one Paul Erlich published a book called Population Bomb and explained that poor, overpopulated Third World countries could not possibly feed themselves. Egypt, India, Nigeria and Bangladesh "would have to be left to their Malthusian fates", he argued.

It should've already happened.. and would've happened already.. had not technological breakthroughs occured. By 1961, India was on the brink of famine. In 1960 India, with the help of the Ford and Rockefeller Foundations, established the IRRI (International Rice Research Institute), which came up with the IR8 brand of rice. Although IR8 would need pesticides and fertilizers, this new type of rice could produce two crops per year instead of one; rice production in India went from two tons per hectacre to six by the 1980's.. and in optimum conditions upwards of ten tons. Several other nations followed suit, including the Phillipines, who's rice production went from 2.7mm tons per year to 7.7mm tons in the 1980's, allowing the Phillipines to become a rice exporter for the first time in it's history. More recently, a new form of rice was developed for Africa called NERICA (new rice for africa), which has succeeded in increasing rice yields in a few nations. Political and other problems slow this program, but it's there to embrace. These new HYV's (high yield variants) are not only for rice, but corn and wheat as well. There has been some criticism of these HYV's.. they are not a flavorful or as nutritious as regular breeds.

Needless to say, the world has yet to see it's Malthusian Day of Reckoning for the most part. Where hunger does exist, it's usually because of political problems more than agricultural problems. The last time the US tried to intervene to help in a famine (Somalia) became a bloody mess. Somali workers employed by the UN and US refused to eat American food; they preferred Somali food, which was being hoarded and sold by warlords.

But things look like they are beginning to change again. The UN's FAO (Food and Agriculture Organization) issued their annual food outlook and more importantly their prices outlook, and it was grim. They give a measurement of cost. In 2000, their measurement of cost was at 96. This report lists it now at 227, a record, even surpassing 2008 when food riots gripped several nations. Their report listed that grain prices have risen 32% in the second half of 2010. A lot of this was due to some unfortunate events; fire and drought swept Russia and the Ukraine, both of which then halted all exports.. a ban which will go through 2011 as well. The FAO's Chief Economist Abdolreza Abbassian said "We are entering new and dangerous territory" and went on to question whether we are prepared for it. This week, the USDA cut forecasts for grain production and acreage in the US as well, adding to the problem.  The floods in Australia have left a key grain producing region under water as well.

Part of the problem.. especially for very poor nations like Egypt and Bangladesh.. is that they must now compete with a China which has begun to change their diet from rice and vegetables to a more meaty diet. One pound of meat takes from 15-30 pounds of grain to produce. As China and India get richer, their meat demands are skyrocketing.. as are their grain imports, squeezing supply further for the poorer nations as prices increase. Jim Rodgers, an investor previously associated with George Soros and more recently noted for his bearishness of Western economies and bullishness of China's, came out yesterday and added rice to his list of buy's, which has included only one thing in the past.. gold. Investments in new agriculture ETF's like WEAT have skyrocketed as well as investors pile onto the northbound train, further increasing the price. Rodgers believes the price of rice will skyrocket. In 2002 when I was a commodities trader, the price of a bushel of Wheat was around $3.65. Today it's $7.73. Other grains have experienced similar rises. Wheat will likely hit $9.00/bu this year. On a longer timeline, the world is slowly but surely seeing a decrease in the acreage available for agricultural production based on many things like urbanization, desertification and soil erosion.

In poorer nations, a large percentage of people's incomes.. sometimes upwards of 75%.. are spent on food. Here in the US, it's around 10%. When prices begin rising, what many people do is begin hoarding as they believe it's better to buy extra now when the price is $5.25 instead of waiting until it hits $6.25 next month. The problem with this is that this very act by itself fuels the rise in prices. This is what was happening in Haiti and other places in 2008, which resulted in bloody riots. It's beginning to happen again this year. So far, food price riots have taken place in Tunisia, Algeria and Bangladesh. Yesterday, the President of Tunisia fled the nation as hungry mobs rioted. While part of it was his nepotism, what got the ball rolling was that he was unable to keep his promise to slash the price of food for his people. Egypt's government and situation are strikingly similar to Tunisia's. As the world's population grows and demand in newly rich nations like China and India soar, there is going to be some hungry people somewhere this year.. and I fear that many of them will take to the streets in anger.
Posted by Mr. Kowalski at 12:38 PM