This morning I came across a video of Nicole Foss {aka Stoneleigh of the Automaticearth blog} in regards to how Peak Oil and economic collapse will affect us and talks about some community based solutions. It's an hour long-- get a cup of strong java-- but it's a must see. 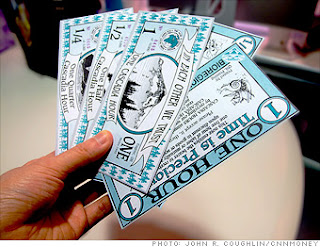 According to the US Constitution, only the Federal Government has the power to issue currency. States may "make silver and gold coin a tender in payment of debts" if they so choose, so long as they are from the US Mint. It also allows communities the ability to issue a form of currency. Until recently, only a few communities and no states have done so. This, however, looks to be changing.

In March of 2011, Utah became the first state to accept US Mint silver and gold coins as payment of debts in their state. South Carolina has proposed a bill which would accept silver and gold coins minted anywhere such as the Kruggerand. Lawmakers from 13 states this year-- including my own state of Minnesota-- have explored or have actual bills in place to issue their own currency.

On a local level, a dozen or so communities have issued some form of currency, including the Washington DC area, where the "Potomac" is accepted in exchange for goods and services. The largest and oldest of these locals is the CHE {Cascadia Hour Exchange} which is issued in the Portland,OR area. There are now over twenty communities in the US doing this.

Why is all this happening ?: Ben Bernanke is hell bent on printing our way into either a recovery or hyperinflation. In a word, fear. Should serious inflation {or deflation} take place in the US, I look for these community currencies to become commonplace.
Posted by Mr. Kowalski at 12:57 PM 9 comments: Links to this post

Today the US Bureau of Labor Statistics {BLS} released it's monthly unemployment report. This report is very likely the most anticipated report anyone releases on a monthly basis as it calculates the unemployment rate. "Employers went on a hiring spree in January, creating 243,000 net jobs, and the unemployment rate dropped to 8.3% !" screamed the CNN headlines. The Dow Jones got a nice lift from all the good news, opening up 118 points.

Unfortunately, once one begins to take a deeper look at the report, a couple of things jump out at you. The first one is the BLS's Labor Force Participation, which measures what percentage of the population is actually employed. To me, this is a far, far more accurate picture of the unemployment situation, and it tells us a very different story: "The labor force participation rate has sunk to a 30 year low of 63.7%. 1.2 million people dropped out of the labor force in January" Why you ask did these people drop out of the labor force ? Simple.. the BLS does'nt count "discouraged workers" in it's official unemployment report as actually being unemployed, so in order to get a palatable unemployment rate, they added 1.2mm people onto the discouraged worker heap. I'm going to include a couple of charts to show what is really happening. What you heard today was pure propaganda, a result of a practice known in DC as "massaging the numbers". Oh yes-- and a large number of these jobs were only part time jobs.

During the Great Depression, our government calculated this very differently. This measurement was called the U6 unemployment rate, which is no longer calculated by the government. Others continue to use this measurement, and it sits at approxinately 16.5%, which is the same as it was in 1936 and 1937 during the Depression. During the Depression, this reached 32% at one point, but a rebound in the mid-1930s helped to bring this down. Nonetheless, this compares with 5.2% during the Clinton years. In short, our country continues to be mired in a mini Depression.

I hope that one day we will have a government more interested in serving the people than their own re-election campaigns. For those who read this, please consider voting for {even if it means write in vote} for Ron Paul. The people who pay for this farce deserve truth and integrity instead of deception. 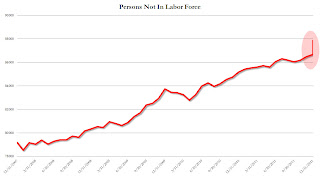 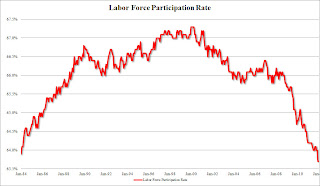 Posted by Mr. Kowalski at 9:39 AM 8 comments: Links to this post