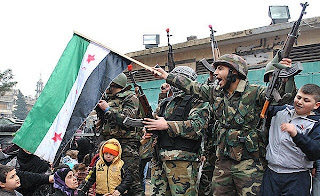 This last week saw some serious events take place in both Syria and Spain, and none of these events bode well for the people of these nations.

In Syria earlier this week, a large bomb went off at a meeting of Syria's highest officials, killing a number of them. Among the deceased were the Minister of Defense, the Interior Minister and Bashar Assad's brother in law Assef Shawkat, who most people understood to be the regime's shadowy enforcer. The Syrian opposition also launched a coordinated attack in several regions, including the heart of Damascus, right before the bomb went off. In the last couple of days the regime has forced back some of the rebel offensives, including the one in Damascus. The counter offensive is being led by Bashar's ruthless, hot tempered younger brother Maher, who is head of the infamous 4th Division. Maher is so hot tempered that he was reported to have shot a family relative at supper for a percieved insult as his entire family ate supper. The rebel offensive in other areas is actually making progress and numerous reports of entire Army battalions switching sides as they advance are probably accurate. The UNHCR on Friday reported that some 40,000 Syrians fled to Lebanon once rebels took over the border crossings. Numerous crossings on the Iraqi, Turkish and Lebanese borders were reportedly overrun, though reports today suggest the regime has taken some back. The UNHCR also reports that Syrian banks are running out of money, which if true is a really bad sign for the government.

My take is that Assad is not yet done, but this week has done a lot of harm to confidence in his regime. And its this confidence that matters most-- in a civil conflict, the one thing you don't want is to be caught standing by the losing side. The Russians and Chinese still are backing Assad diplomatically-- but that is not where Assad needs help. War is an expensive proposition-- vehicles break down, tanks get blown up, soldiers get wounded, weapons wear out and jam, ammo, gas, pay for the soldiers and thugs-- and the Syrian economy is essentially crumbling under the strain. This summer's drought in the US and the ensuing rise in grain prices will also be felt by the Syrian people. Unless Assad gets a lot of financial aid-- and he might well get it from Iran or Russia-- his regime probably won't last another six months.

Many people are probably wondering why Syria matters. After all, they export only tiny amounts of oil. But it matters because Syria is ground zero in a bigger power struggle-- the one between Iran & Russia on one side and Saudi Arabia, Qatar and Turkey on the other. Syria borders Israel and Lebanon, where several minor wars have been fought recently. Tarsus, Syria is home to Russia's only Mediterranean sea port. Simply put, it has the potential to morph into a much bigger war as well as a sectarian bloodbath of unparalleled proportions.

In Spain, a bailout was announced for Spain's banks-- and with it came some ugly terms from the EU as outlined in my last post. There were protests and riots in a few places, but all in all it was'nt all too serious. One thing the Spanish government did this week was to announce a bailout fund for it's states {called regions} of some $25 billion. As of today, nearly all of Spain's regions have applied for bailout funding from this fund. On Thursday, the Spanish government held an auction for 5 year bonds-- and the auction failed. By Friday afternoon, Spanish bonds were sinking like the Titanic (ie.. interest rates demanded by people loaning to Spain were shooting upward}. They have been going up and down wildly for a couple months now, and its entirely possible they'll head south again this week. But another week of this and a second, bigger bailout will have to be announced to calm the bond markets. We're seen this all before-- in Greece, Ireland and Portugal, when bonds get to a certain point there seems to be no return, and I fully believe we've reached this point for Spain. Italy's bonds also sunk and are not far behind Spain. If you're getting that Greece feeling, you're not alone. It will be most interesting if Italy will be able to participate in the next Spanish bailout-- and if not, how long France's AA+ rating will last. The best answer for Europe is for Germany and their Nordic cousins to exit the Euro; today's article by Ambrose actually outlines a way for this to happen. But will it ? Maybe-- but not until Spain bites the dust financially. Unfortunately, this very event might well collapse the entire Continental banking system before the currency conversion takes place. From Ambrose's article: http://www.telegraph.co.uk/finance/comment/ambroseevans_pritchard/9418988/Blaming-the-Spanish-victim-as-Europe-spirals-into-summer-crisis.html
Posted by Mr. Kowalski at 11:21 AM