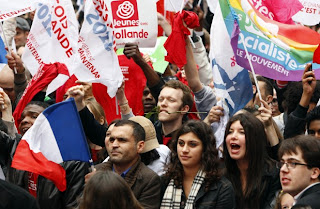 Yesterday elections in France and Greece brought new governments to power with different ideas on how to tackle their respective economic problems. In France, Francois Hollande, the Socialist candidate, came to power with the idea of increasing taxes on the wealthy and pushing the ECB into greater purchases of sovereign debt. The idea of pushing the ECB to purchase more sovereign debt would, in theory, weaken the Euro currency as ECB purchases amount to little more than printing money and loaning it to governments. This idea is vehemently opposed by Germany, who does'nt want to see their hard earned savings devalued and their loans to other EU nations monetized away. Angela Merkel openly supported Sarkozy, something she probably will come to regret. Hollande also promised a balanced budget by 2017, lower the retirement age to 60, and to hire 60,000 new teachers as well as increase taxes on those making more than a million per year from the current 46% to an absurd 75%. Sorry Mssr Hollande, but expanding the welfare state and raising taxes isn't going to work in a world where French businesses {and investors} can simply uproot and relocate to other nations who choose not to ruthlessly punish their success. Why would anybody start a business there with this mentality ? Answer: They won't.  They'll start their business in Poland or Ireland.

In Greece, the two pro-bailout parties {Pasok and New Democracy} together got 149 seats in their Parliament. You need 151 at least to form a government, therefore they would need to get another of the anti-bailout parties on board. This afternoon, the New Democracy leader announced that he was unable to form a government. Next up is an anti-bailout leftist party's {Syriza} turn to try and form a government. This is unlikely to happen as they would need to get an ultra right party on board-- thats rather like Stalin asking Hitler to share Poland, and we all know how that ended. The most likely outcome is another election in a month or so, and in the meantime there will simply be no government. I'm not so sure this is all too bad; at least the crickets can't make anything worse than the politicians did. Will the next election produce a clear result ? Probably not. Oh well-- Belgium has been with out a government for a few years. Yeah this will end well.

Moving along to another socialist catastrophe, Spain today put out some economic numbers that were truly scary, even for a nation already used to Depression-era statistics. "The interannual variation of the Industrial Production Index for the month of March was -10.4%" and this was followed by "The Spanish service sector declined from 46.2 in March to 42.1 in April", which is a decline of nearly 10%. In a month. This is what can only be termed an implosion. All of those newly unemployed will be applying for government benefits-- from a government teetering on bankruptcy and who, thanks to the aforementioned economic decline, will have even fewer revenues to pay them with and will thus have to borrow even more. The Spanish Gov't is also going to bail out one of their big banks, Bankia, costing them from $8-11 billion. If I was the Spanish PM, I'd have turned sheet white and taken to heavy drink by noon. Not that it would matter much; there's probably little he can do now that the ship has struck the iceberg. Yeah this will end well. Short the Euro, folks.
Posted by Mr. Kowalski at 5:17 PM